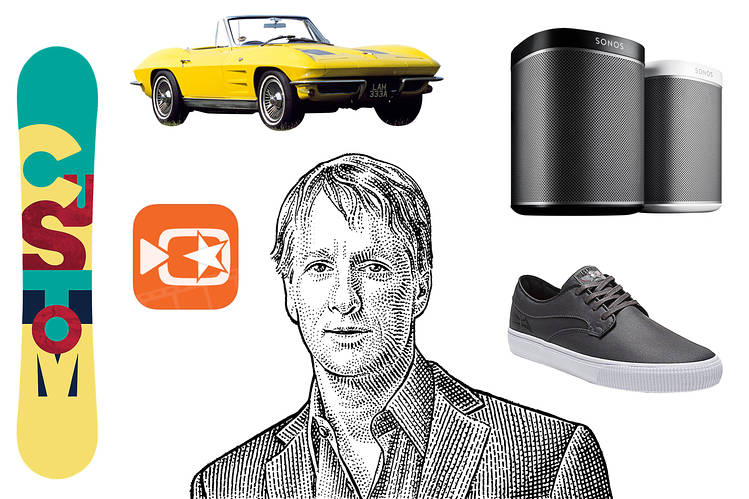 Tony Hawk, 47, on his preferred footwear and how he listens to music while he rides (sorry, no boombox)

I grew up surfing, but I find myself snowboarding more these days. (I don’t have the patience or the time to wait for good waves.) We have a place up in Mammoth Lakes [Calif.] where we snowboard a few times each season. I have a Burton Canyon board because I wear a size 13 shoe. The Canyon’s pretty wide, and it’s not that easy to find wide boards.

One of the best sites for skate videos is theberrics.com. The Berrics is an exclusive, invite-only facility in downtown L.A. They’ll have top pros come in, and shoot them throughout the day and put highlights on their site. One of the most popular parts of their program is called Battle of the Berrics, where people challenge each other to different tricks.

You want skate shoes to be subtle, but really durable, especially around the tops, because you fold your foot around when you slide it across the board. Shoes can wear out super fast when you do that. I’ve been wearing my son Riley Hawk’s signature Lakai shoes lately.

When I’m out on the road and I want to get a video clip that I’ve shot up on social media in a hurry, I’ll edit straight from my phone using [the app] Viva Video. I originally learned how to edit video on Video Toaster—one of the first consumer, nonlinear video editing systems—on a Commodore Amiga. I got one of those early on because I was doing skate videos. 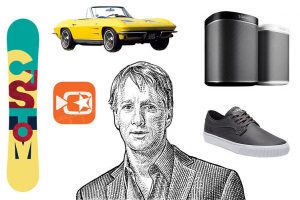 I don’t work on cars myself, but I wish I did because I have a 1963 Stingray and I would love to be able to understand how it works. As a kid, it was my dream car. It took some searching, but I finally got one eight or nine years ago. I’m not keeping it in mint condition or anything, but I’m happy with it. I had to install seat belts in it. It only has one front seat, so I can’t put my four kids in it. I think I’d get pulled over.

Some people use earbuds when they skate, but I don’t like that. I like actually hearing what I’m doing—the sounds of the skating as well as the ambient noises. But I’ve always listened to music while I skate. When I was a kid, we used to bring a boombox and a mixtape to the skate park and blast it. Now I have a whole Sonos system set up on my ramp at the office.

Given my age and experience, I use an insole called Footprint, which is a bit thicker. They’re designed by a pro skater—Aaron “Jaws” Homoki—who’s known for jumping off the biggest stuff, so I trust him.